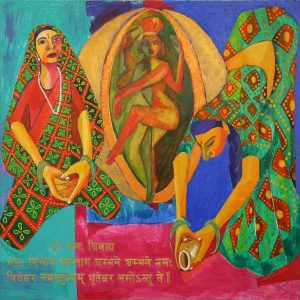 Acrylic on canvas – 2002. This painting works on two spiritual levels. In the middle of the painting Shiva is depicted as Natraj, the Lord of the Dance. This is also the term used to describe Christ. The woman on the right is devotionally scooping up water in order to incant a prayer to Shiva. On the opposite side a woman meditates. Both women are dressed in Bandhani saris. Bandhani is a traditional tie-dyed textile from Gujarat.

On another level, the painting describes the story of two disciples of Christ – Mary and Martha. In Christian writing, Mary is often seen as representing contemplation, prayer and devotion, whilst Martha expresses her devotion through good works and helping others.