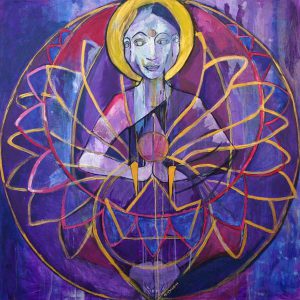 Mixed media on canvas – 2003. This painting makes reference to the Sahasrara Chakra which is located in the crown of the head.

In this painting, Caroline Jariwala looks to Celtic mythology for her inspiration. In Celtic legend, great importance is given to the female Trinity of Daughter, Mother and Grandmother. On the left we see the grandmother who is losing her hair, on the right we see the child and in the middle is the mother with a prominent bindi on her forehead. This work, like many others by Caroline, evokes a sense of the past, present and future. The women are placed amongst the Sahasrara Chakra symbol – an unfolding lotus flower which symbolizes the infinite. Bindi is the red mark made of kanku paste applied to the forehead during many Hindu ceremonies.