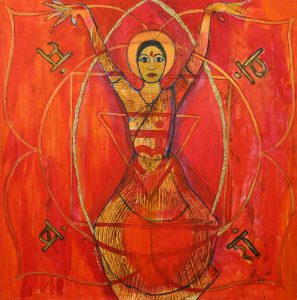 Mixed media on canvas – 2003. This is the first in Caroline Jariwala’s series of seven paintings influenced by the colours and symbols relating to the seven Chakras. The Chakras are found in ancient Hindu Yogic philosophy which states that there are seven points that run down the central column of the body.

This work shows the symbol of the first or ‘base’ Chakra which is located at the base of the spine. The colour associated with this area is red and this work explores the power and passion inherent in this colour. Devi is the all powerful mother goddess in Hindu spirituality. Her pose is positive, assertive and challenging. The use of the halo roots this work in both the Christian and Hindu religions.